The Orphan Witch by Paige Crutcher 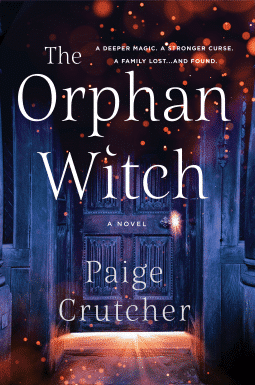 Witches are just cool, aren’t they? I mean you’ve got the academic scene with Harry Potter, the small town dynamics of Practical Magic, the teenage angst of The Season of Witches, and now we can add Penelope and the witches of Wile Island from this book for a little family drama action.

I’m not going to lie. If I woke up tomorrow with magical powers, I’d probably start walking a little taller and feeling a certain way about myself. But, if like Penelope, those magical gifts put those I love in danger, I would do exactly what she does – learn to go it alone.

I like that this fully embraces magic in a contemporary setting. And I liked the complexity of the history of the island and the witches who live there. There was lots of great sensory description and I found the characters to be unique and memorable. I especially enjoyed the Library of Lost Things and the dashing librarian.

Penelope is likable, her plight plausible, and I genuinely wanted to see her step into the truth of her powers and become the hero.

What I Wish Had Been Different

There were several places where the pacing of this book slowed down and I was struggling a little bit to stay engaged.  As Elvis was known to sing, I might have liked “a little less conversation, a little more action please.” Sometimes I felt that descriptions and build up to some really great conflict scenes just took a little too long to get to the point. There is a lot of backstory in this book and I got a little lost with some of it.

For it’s relatable characters, it’s inclusivity, and for so many great, vivid scenes, this book earns 3.5 witchy stars.

A deeper magic. A stronger curse. A family lost…and found.

Persephone May has been alone her entire life. Abandoned as an infant and dragged through the foster care system, she wants nothing more than to belong somewhere. To someone. However, Persephone is as strange as she is lonely. Unexplainable things happen when she’s around—changes in weather, inanimate objects taking flight—and those who seek to bring her into their family quickly cast her out. To cope, she never gets attached, never makes friends. And she certainly never dates. Working odd jobs and always keeping her suitcases half-packed, Persephone is used to moving around, leaving one town for another when curiosity over her eccentric behavior inevitably draws unwanted attention.

After an accidental and very public display of power, Persephone knows it’s time to move on once again. It’s lucky, then, when she receives an email from the one friend she’s managed to keep, inviting her to the elusive Wile Isle. The timing couldn’t be more perfect. However, upon arrival, Persephone quickly discovers that Wile is no ordinary island. In fact, it just might hold the very things she’s been searching for her entire life.

And some things she did not want. Like 100-year-old curses and an even older family feud. With the clock running out, love might be the magic that saves them all.