A guest post by Ericka Smith from Pretty Literate

July 4th is a special day.

My earliest remembrances of this summer holiday involve the smells of charcoal-cooked BBQ, the refreshment of my aunt’s swimming pool sheltered under the towering pines in rural Alabama, a trip into town to watch the city-sponsored fireworks, and a smorgasbord of aunts, uncles, and cousins with whom to share the memories.

As we draw nearer and nearer to Independence Day and our thoughts begin to turn toward celebrating on July 4th, I wanted to share a little of that classic Americana with you through the stories of one of these 4 Classic American Authors Every Woman Should Read. 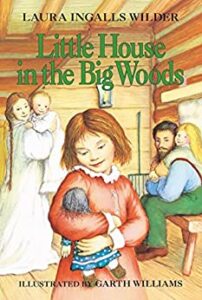 The author from which Michael Landon brought our favorite childhood pioneering family to the small screen, Laura Ingalls Wilder’s (1867-1957) writings are a must-read for every American woman. If you were a tomboy growing up, all the more!

Mrs. Wilder’s autobiographical (yet somewhat fictionalized) account of her life while her family pioneered on the frontier is the warm, homey read you didn’t know you needed to vicariously experience this Independence Day (especially Chapter 8 of Little Town on the Prairie).

Laura and her family embody the idea of independence, family, love, devotion, and courage. What’s more July 4th feeling than that? American author Catharine Maria Sedgwick (1789-1867) became known on both sides of the Atlantic for writing short stories. Catharine is credited as being one of the founders of American literature (alongside big names like James Fenimore Cooper and Washington Irving). In fact, she was the most successful American female writer in the first half of the 1800s.

Many of Catharine’s writings focused on minority groups and featured independent women that didn’t necessarily conform to the standards of their times. While many of her leading ladies ended up marrying in her writing, Catharine remained independently single all the days of her life.

A great introduction to Catharine M. Sedgwick’s writing (especially with a nod to the seasonally appropriate idea of Independence) would be Hope Leslie: or Early Times in the Massachusetts Edith Wharton’s (1862-1937) family of origin was the original Jones family – literally! – for they are the one for which the saying, keeping up with the Joneses, was coined. Growing up as such, Ms. Wharton had a depth of first-hand knowledge of life in the Gilded Age that few (if any?) could surpass, and it was on that insider’s knowledge that she traded as inspiration for her novels (like The Age of Innocence, for which she won a Pulitzer Prize – the very first woman to receive the honor).

One of the most versatile writers of her time, Ms. Wharton wrote over 100 published works including both fiction and non-fiction. She was a poet, an autobiographer, and a novelist. She wrote about travel, penned short stories, and even authored a book on architecture, so there is a Wharton book to fit every reader. Find yours. Harper Lee’s (1926-2016) two novels are, surprisingly, not gritty reads full of racial slurs and offending behavior as one might believe. Her first novel, To Kill a Mockingbird (for which she won a Pulitzer Prize), is an engaging book about the innocence of childhood, especially in small town U.S.A. during yesteryear.

The reader is pleasantly surprised by the feelings of nostalgia Ms. Lee engenders – a time when kids lived feral on the streets during summertime, slept on the screened-in back porch more than in their beds during the summer, provided their own entertainment, and neighbors looked out for one another’s kids. A time when girls twirled batons and boys used BB guns for target practice.

Harper Lee’s novels (to be read in order, as Go Set a Watchman is chronologically a sequel) are an insider’s look into the still-segregated deep south during the post-Reconstruction Era, reminding us how far we’ve come and how far we still have to go until Thomas Jefferson’s declaration that “all men are created equal” rings true.

On Friday, July 1, I am sharing a little Revolutionary Reading on Pretty Literate’s Blog – a list of must-reads that will surely prod your independence, stoke the flames of freedom within your breast, and send you searching for an American flag to wave while you listen enchantedly to Lee Greenwood perform “God Bless the U.S.A.” I hope you’ll check it out.