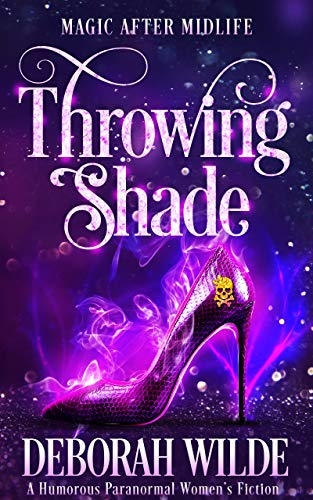 When I caught this book’s tag line – magic after midlife – it immediately went on my TBR list. Don’t get me wrong, there are tons of great stories out there about young women and their powerful magic, but it is a nice change to see a protagonist who isn’t a gorgeous twenty-something with nary a fear of gravity’s body-altering affects or lacking in the kind of take-no-grief attitude that can only come with age.

This book delivered on so many levels…and I haven’t chuckled this much while reading a book in a good long time. Beyond the realistic and all-to-familiar daily struggles that come with middle age, I loved the delicate weave of Jewish folklore, superstition and vocabulary over some familiar paranormal tropes. It felt new and it kept me interested. There is some juicy tension between Miriam Feldman and the French wolf shifter she teams up after her best friend goes missing. Toss in some demons, a couple of vampires, a golem and some shapewear and you’ve got the makings of a highly entertaining series.

There were a few places where I got a bit lost in the explanations of things, but a second read helped to clarify things. I wouldn’t call this a quick read, but it is an entertaining one, and one I couldn’t wait to get back to. I am very much looking forward to book two and more.

For the sheer entertainment value, the snarky, quick dialogue, and the smoldering tension between the main character and her wolf-y counterpart, this book gets as a glorious embrace-middle-age score of 4 and a half stars.

P.S. I sincerely hope this comes out as an audiobook. To hear some of these lines said out loud?? Oy vey!

She’s ditching her shapewear, owning her hormones, and letting her magic fly free.
Underestimate her. That’ll be fun.

To make matters worse, her best friend goes missing and Miri is thrust into a world of hidden magic, vampires, and a legacy of hatred aimed directly at her. Hard to say which is more dangerous, this spiderweb of supernatural power plays, the grumpy French wolf shifter she’s teamed up with, or Miri herself, kicking butt and rediscovering the woman who got lost along the way.

But lines get blurred in the shadows, and if she’s not careful, she could lose everyone she loves. She’ll have to turn her invisibility into strength and pray they never see her coming.