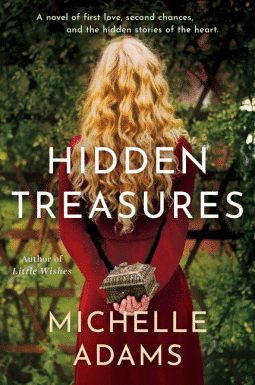 First loves are almost always the hardest. Nothing is sweeter and nothing stings more than the heartbreak that often follows.

When Harry’s mother dies, she leaves him a cottage jam packed with stuff and a mystery. But she also leaves him a chance to reconnect with the love of his life…something she never got to do.

The characters in this book are refreshingly realistic. Harry is socially awkward, Tabitha is fighting with self preservation and Frances is a girl who gets lost in the idea of love. I mean, who doesn’t relate or know someone exactly like one of these characters?

As I mentioned, the characters are brilliantly developed. I really felt for each of them. I wanted Harry to find the answers he was looking for. I wanted Tabitha to find and hold onto her own self-worth, and my heart really broke for Frances.

There is a ton of great sensory description. I could see the cottage and all of the things. I could practically smell the French countryside, see the artists as they lay paint to canvas.  It was easy to suspend disbelief and sit as a silent observer in the middle of both storylines.

What I Wish Was Different

Two things keep me from giving this book a five-star rating despite the fact that it was beautifully written.

First is the fact that a sixteen-year-old Frances enters into a relationship with a man twice her age. I get that times were different and it demonstrates how alone and taken advantage of she truly was, but I have to wonder if the same thing couldn’t have been accomplished with her at 18 instead of 16.  That Henry then meets this man and there was no discussion of the inappropriateness of the relationship just sat a bit wrong with me. The author doesn’t glamourize that relationship, and in fact, does a good job of showing how vulnerable Frances was, but it was still a bit uncomfortable for me to read.

Second, I liked the mystery of the box and I really wish there was more to it. This had so much potential and I wish it had been developed a bit more. I did enjoy the ending, it tied up loose ends, but I just wanted more when it came to the story and history of the box.

Once upon a time, in a small village in southern France, a pretty, willful English girl is falling in love. Frances Langley has fallen under Benoit’s romantic spell, so sure is she that he is everything she’s ever wanted—a self-assured, sexy man, experienced and just a little bit mysterious. But Frances is hiding a secret—one that would surely separate them if he ever knew the truth. And to hold on to his love, she is willing to do anything for him, even put herself at risk by hiding a precious object, stolen by the Nazis decades before.

Years later, Frances’s son, Harry, opens the door of his late mother’s home, never expecting to see Tabitha—the lost love of his life—on the other side. Their angry parting had broken his heart, but now she holds a letter, sent by his mother just before her death, begging the pair to search—together—for a priceless jewelry box, hidden somewhere in her little Cotswold cottage.

Harry quickly dismisses the search, but as an art historian, Tabitha cannot risk the chance to recover something so valuable that was long thought to be lost. And so they embark on a journey of discovery, but soon find themselves searching for much more than a missing piece of art. Together they learn that the true riches are not those buried in the clutter of Francis’s cottage, but are instead the treasures they each hold, buried deep inside their hearts.