All of Us Villains by Amanda Foody and Christine Lynn Herman 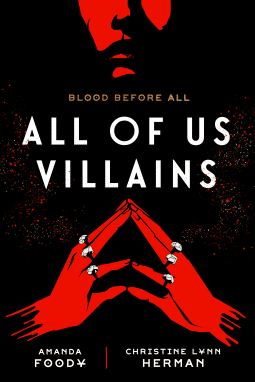 I’m going to give it to you straight. If Hunger Games, Beautiful Creatures, and Red Rising had a magical love child it would be this book.

Brilliant. That’s the long and short of it. When the book started and suggested there would be seven characters vying it out in a magical Hunger Games-like battle, I was worried. Seven characters is a lot. Would there be enough character development. Would I be able to keep them all straight. Would I fall in love with one character and get bored with the others.

I had absolutely nothing to worry about. The authors took their time. They developed a great backstory while creating characters that I absolutely adored…even though they are all supposed to be villains.

Volunteer as tribute, cast a spell, give yourself over to the game or do whatever you have to do to add this book to your TBR list. You won’t be disappointed.

There was so much to like. Great character development, great setting, great backstory. This is book one in a series and I cannot wait to read book two. Better yet, to see this turned into a movie.

I like YA Fantasy but it’s not my first go to. It’s gotta be good to earn a nod from me. And just in case you can’t see it from where you are sitting, I’m nodding vigorously.

For a story I couldn’t put down, an entire cast of characters I loved, and a satisfying yet intriguing ending, this book easily earns five stars.

Every generation, at the coming of the Blood Moon, seven families in the remote city of Ilvernath each name a champion to compete in a tournament to the death.

The prize? Exclusive control over a secret wellspring of high magick, the most powerful resource in the world—one thought long depleted.

This year, thanks to a salacious tell-all book, the seven champions are thrust into the worldwide spotlight, granting each of them new information, new means to win, and most importantly, a choice: accept their fate or rewrite their story.

But this is a story that must be penned in blood.