The Lights of Sugarberry Cove By Heather Webber 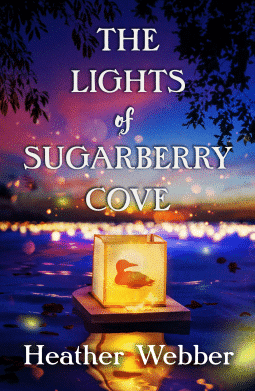 Sadie Scott’s near-death experience pushed her to get out of her hometown of Sugarberry Cove, and find her place in the world. But it left those she left behind – her family and her high school sweetheart – struggling to come to terms with her absence. And as is often the case, running away from something leaves lots of unresolved issues that refuse to get any better until they are dealt with head-on.

This book reunites two sisters and their mom, along with a cast of quirky of supporting characters at the family’s Bed and Breakfast just weeks before the Lantern Festival Sugarberry Cove is famous for. Told from the POVs of each of the sister, this story has elements of family drama, secrets, love, and even a bit of magic.

While I might have liked a little more variation in the voice of the two sisters, the story was a joy to read. This would make for a great beach read with just enough conflict to make the story interesting and enough good-hearted, feel-good resolution to keep it interesting. I enjoyed the characters, loved the ending, and sincerely hope there are more books planned for these two sisters and life in Sugarberry Cove.

The Lights of Sugarberry Cove by Heather Webber will be released on July 20th, but it is available for preorder on Amazon.

Sadie Way Scott has been avoiding her family and hometown of Sugarberry Cove, Alabama, since she nearly drowned in the lake just outside her mother’s B&B. Eight years later, Sadie is the host of a much-loved show about southern cooking and family, but despite her success, she wonders why she was saved. What is she supposed to do?

Sadie’s sister, Leala Clare, is still haunted by the guilt she feels over the night her sister almost died. Now, at a crossroads in her marriage, Leala has everything she ever thought she wanted—so why is she so unhappy?

When their mother suffers a minor heart attack just before Sugarberry Cove’s famous water lantern festival, the two sisters come home to run the inn while she recovers. It’s the last place either of them wants to be, but with a little help from the inn’s quirky guests, the sisters may come to terms with their strained relationships, accept the past, and rediscover a little lake magic.