The Book of Speculation by Erika Swyler 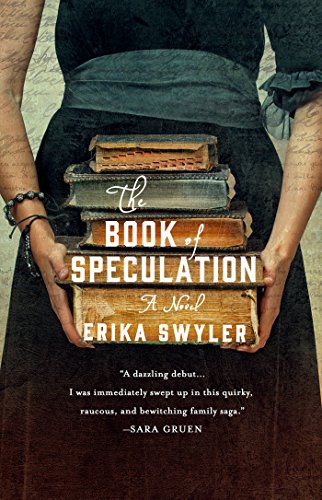 Imagine getting a book in the mail. And old book, one that looks a little worse for wear. Inside, scrawling handwriting and beautiful sketches begin to tell the tale of a traveling  circus troupe. Now imagine that woven into those pages is a warning, a curse that has followed your family for more than a hundred years.

Now imagine what you would do to stop it.

What I Liked:
This book is rich with texture. Told in two storylines – one from the present and one from the past – Erika Swyler weaves a tale of mystery, magic, betrayal, love, and destiny. It was easy to empathize with the main character, Simon. And it was just as easy to get lost in the story of the wild boy who finds himself taken in by traveling troupe of performers.

With characters that are so distinct, they leap from the pages, and for  a storyline that sucked me right in, this book earns a solid 4.5 stars.

Simon Watson, a young librarian, lives alone in a house that is slowly crumbling toward the Long Island Sound. His parents are long dead. His mother, a circus mermaid who made her living by holding her breath, drowned in the very water his house overlooks. His younger sister, Enola, ran off six years ago and now reads tarot cards for a traveling carnival.

One June day, an old book arrives on Simon’s doorstep, sent by an antiquarian bookseller who purchased it on speculation. Fragile and water damaged, the book is a log from the owner of a traveling carnival in the 1700s, who reports strange and magical things, including the drowning death of a circus mermaid. Since then, generations of “mermaids” in Simon’s family have drowned–always on July 24, which is only weeks away.

As his friend Alice looks on with alarm, Simon becomes increasingly worried about his sister. Could there be a curse on Simon’s family? What does it have to do with the book, and can he get to the heart of the mystery in time to save Enola?

In the tradition of Sara Gruen’s Water for Elephants, Erin Morgenstern’s The Night Circus, and Elizabeth Kostova’s The Historian, The Book of Speculation–with two-color illustrations by the author–is Erika Swyler’s moving debut novel about the power of books, family, and magic.