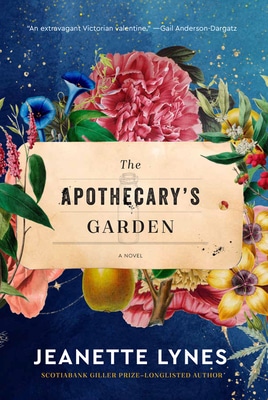 Victorian Canada: Touring circuses, seances, and a world powered by steam engines. But in Belleville, Ontario, a twenty-eight-year old spinster, Lavender Fitch, barely scrapes by, selling flowers from her garden at the train station, her position in life greatly diminished after the death of her father, the local apothecary.

Then, one day, a glamorous couple step off the train. The lady is a famed spirit medium, Allegra Trout, who has arrived for a public show of her mediumship, accompanied by her handsome but disfigured assistant, Robert. With her striking beauty and otherworldly charms, Allegra casts a spell over Belleville from the moment she arrives.

Lavender is captivated by the medium as well. She’s been searching for a secret cache of money and hopes Allegra might be able to contact her dead mother for clues to its hidden location.

As the Trouts remain in town, preparing for their Mystical Extravaganza, Robert and Lavender grow close, much to Allegra’s disapproval. Will Robert and Lavender’s relationship blossom or will it be abandoned when he leaves for the next town? Will Lavender find her mother’s gift or be forced from her home and beloved garden?